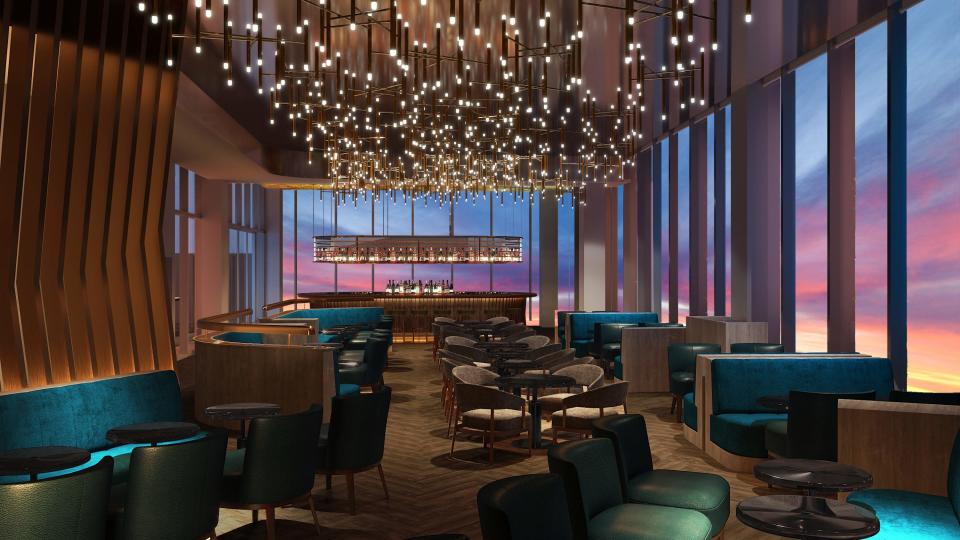 At 401 N. High St., FYR, Spark and Stories on High will open alongside the tower this fall, according to a news release

FYR will feature a menu of American fare with Latin influence, cooked over a wood-burning grill, along with wine, beer and cocktail programs that include seasonal and locally sourced ingredients. The restaurant will be accessible from High Street.

Set to be the tallest rooftop bar in Columbus, according to Hilton Columbus Downtown, Stories on High will include two outdoor terraces, a “cocktail-forward” food and drink menu, and a 360-degree view of the city 28 stories above High Street.

The food and drink menu will feature small plates and bar dishes with a Japanese influence, including yakitori, fresh sushi rolls and wagyu sliders, a signature cocktail program and an expansive wine list.

And located on the tower’s lobby level, Spark will feature a Midwest-driven menu with classic cocktails and locally sourced brews.

The Hilton Columbus Downtown’s new 28-story tower is set to be completed fall. Attached to the Greater Columbus Convention Center, the original building across North High Street and the new tower will put the hotel’s total at 1,000 rooms, which will make it the largest in the state.

Michelin-recognized chef Sebastian La Rocca has been named executive chef and will relocate from Costa Rica to oversee all three restaurants. La Rocca has worked with chefs Jamie Oliver and Michael Roux in the United Kingdom, and most recently was chef and owner of the Eat Gastro Group in Costa Rica.

“As someone who has lived and traveled all over the world, I’ve seen first-hand how food can be a catalyst that breaks down barriers and brings people and communities together,” said La Rocca in a statement. “I’m looking forward to building relationships in the community with local suppliers as menus at all of our venues will feature signature ingredients that spotlight the rich, agricultural heritage of the Midwest.”

This article originally appeared on The Columbus Dispatch: New restaurants to open as part of Hilton downtown hotel expansion